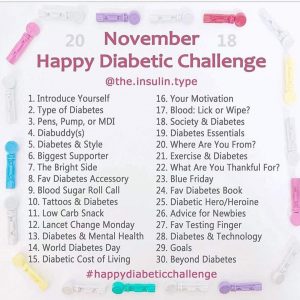 So I’m a bit late on my posts here, but I’ll keep working through until I’m caught up.

When I was diagnosed, I was put on “MDI” – multiple daily injections. Back then, I would take NPH as my long-acting insulin at breakfast and dinner, and Regular as my short-acting insulin at the same times. Eventually, I increased to 4 shots a day; I switched to Humalog and Lantus; and I started using pens, which were not as strict about refrigeration and were slightly less intimidating for my friends.

Story: Once, I realized I had forgotten to take my insulin while I was out with friends. We were probably young college students. One of my friends went into a store and I was waiting in the car, so I decided it was a good time to take my shot. She saw me from inside the store and came running out to tell me not to do it!

I switched over to the insulin pump around ten years ago. I objected for the longest time because I didn’t want to be attached to a machine 24/7, but the benefits of a machine that mimics what my pancreas should be doing, that allows me to eat a cookie and take some insulin without worrying onlookers that I’m doing something illegal, have converted me to a proud cyborg. There’s still a lot of balance work, but the way it works has allowed me much tighter control than I ever had on MDI (with syringes or pens – both of which I still have as a backup, of course!).